Prince Tribute at the Basement Club

Prince Rogers Nelson was an American singer, songwriter, musician, record producer, actor, and director. His music will forever make us smile and dance. 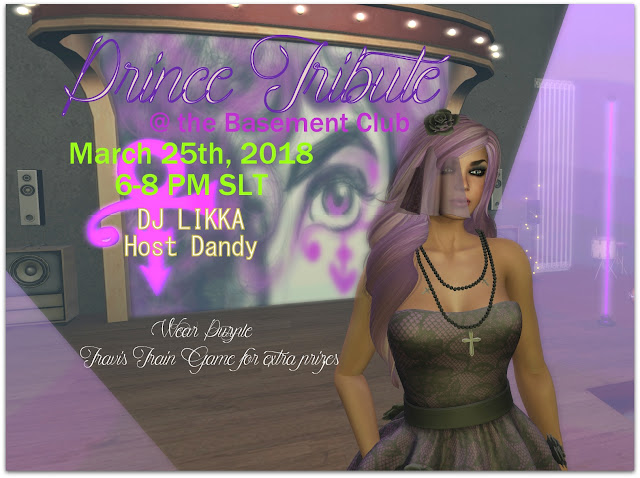 It was such a fabulous celebration here at the Basement Club to listen to all the favorites and some not so well known tunes.

We partied like it was 1999. Remember the Basement Club always has some special themes and there are always some goodies you get free.
Mark your Calendar for the special 2nd year anniversary set coming up April 1, 2018 at 6PM SLT.

Posted by Anjelikka at 6:30 PM No comments:

Welcome to Spring at the Retreat 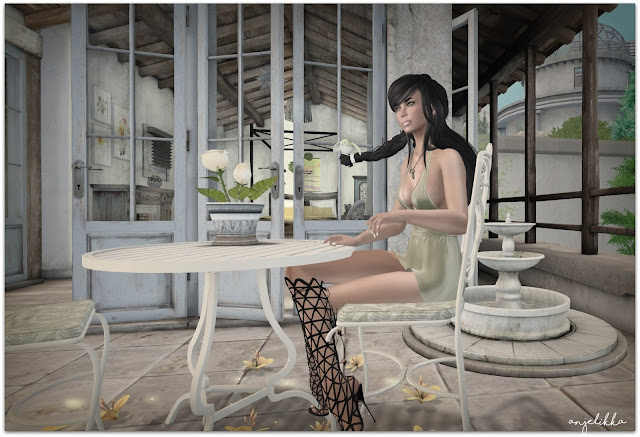 The spring season is full of transformations. The temperature rises to a more bearable degree, opposing Mother Nature's last few months of freezing surroundings. The leaves we saw fall and flowers we saw wilt are now budding into lush, green, picture-perfect plants. Aside from the weather's transformations that occur in the spring season, we are transforming our lives, too.

Why not stop by the Retreat and check out this lovely home? You cannot beat the price because it is only 250L$ per week plus you get plenty of prims to add your personal items. If you prefer you can get the house unfurnished as well.

Residents who live here at the Retreat love it and stay for a long time. 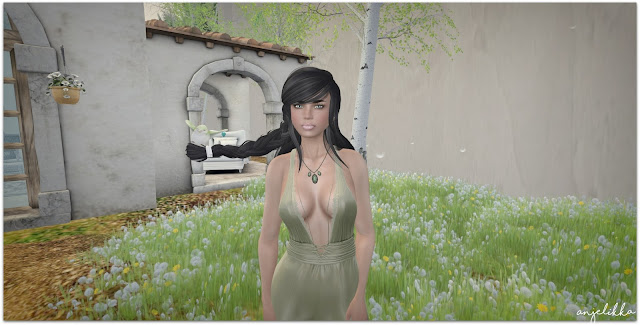 Here are some of the aspects of the Spring Equinox and how we can incorporate them into our own lives to help us better communicate with the spiritual forces of the earth: 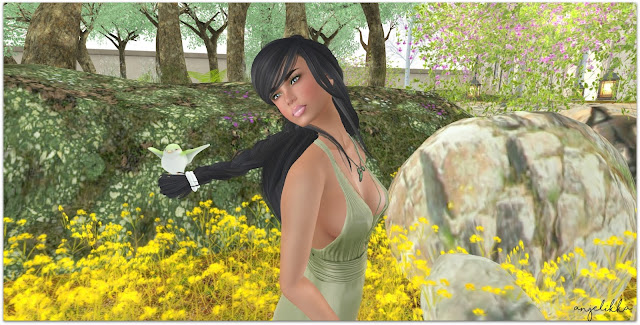 Posted by Anjelikka at 10:48 AM No comments:

"Top o' the mornin': This phrase simply means “Good morning,” although no one seems sure why. The phrase is not used that commonly in Ireland anymore, but traditionally the correct response is “And the rest of the day to you,” which means “Enjoy the rest of your day."

We had a super cool party with green beer and all at the Basement Club. DJ Dandy provided the tunes and it was superb as always. Stop by anytime, we are here Friday, Saturday and Sunday evenings with nothing but the best music. Trust me on that you can go to many venues and you will hear the same stuff over and over but this is why the Basement Club is different you will hear unique music from all genres.

The party continued later with DJ Likka at Totally 80s Club with only Irish Bands from the 80s and it turned out to be the best St. Patrick's Day party ever with the 36 leprechauns who attended.

Posted by Anjelikka at 9:23 AM No comments:

Spring Break on the Horizon

Although I still have a few weeks before Spring Break, I am thinking of taking a short trip somewhere in real life. Now, I question myself why they call it Spring Break? Who came up with that term and what does it mean? 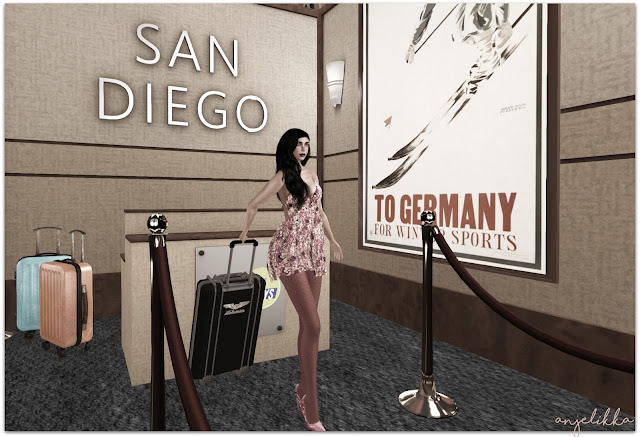 In the old days there was Palm Springs when you drove up and down Palm Canyon Drive which took you hours because of the traffic. You would see tons of people with barely anything on. It was not a good image for this town at all and then when the former mayor Sono Bono put a hold on it and stopped the madness, the wild and crazy people stopped coming. Whew!!!

Then there is San Diego on the warm California Coastline. It’s going to be a Toh-tally tubular time! "Fer shurrr!" San Diego has tons of things to offer and not just for the College crowd, but there is something for everybody. I like the gas-lamp quarters with all the restaurants and jazz and blues clubs. You will find plenty of music and food here. 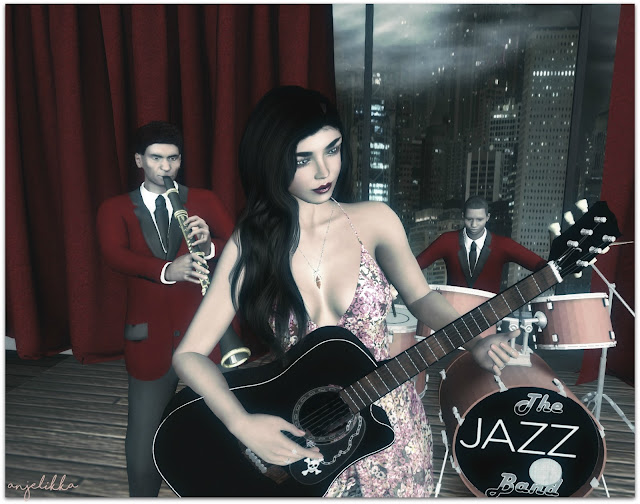 So, whatever it is you are gonna do for Spring Break, get out there and do something. Oh wait, I forgot you all don't get a Spring Break. Oh well, I will post pictures and write about it, it will be like you have been there. Fer Shurrr. 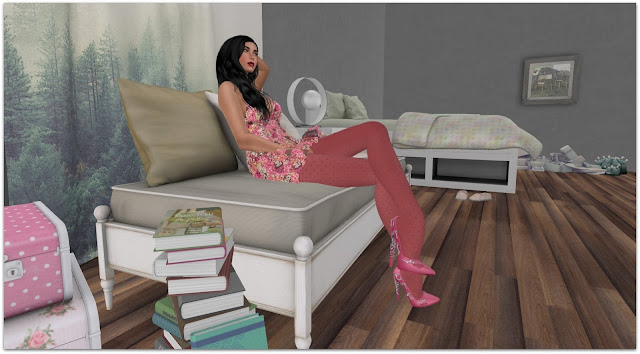 Posted by Anjelikka at 8:28 AM No comments:

The VWBPE Conference is a completely virtual conference that is conducted using simulated environments. Participants experience the conference through a virtual reality type setting including conference rooms, theaters, exposition halls, meeting spaces, and other types of venues similar to a brick and mortar type conference. 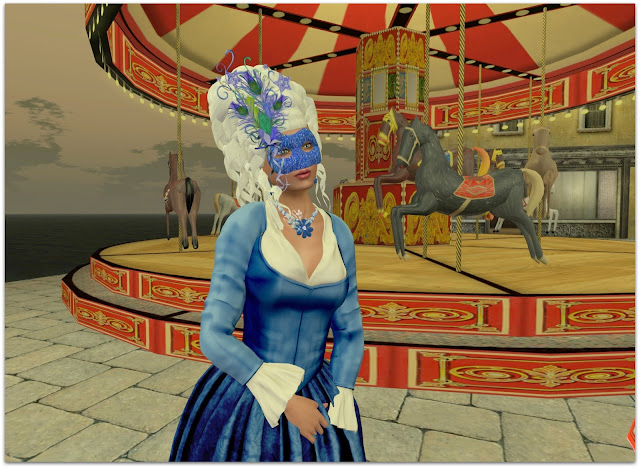 It was great fun playing the Mme Donna Pericolusa best friend of the duchess. I was able to convince Dandy and Greg to come and wear some vintage clothes and blend into the scenes of Venice.
Women in Venice, as elsewhere in Italian society, were expected to obey their fathers and their husbands and dedicate themselves to childbearing, charity, and piety. Women of the middle and lower social ranks had more freedom than those of the nobility and high bourgeoisie. They were able to own property, participate in the public life of the marketplace, and defend themselves in court. Prostitutes and courtesans were numerous in a city with a large and mobile population, a large group of foreigners, and an elite of unmarried noble males (who remained bachelors so family wealth would flow to the next generation undivided). Venice also had a large number of women, committed nuns (including many forced as children into the convent as a cheaper alternative to marriage), abandoned children, widows, and former prostitutes, who lived in convents.

Posted by Anjelikka at 9:01 AM No comments: 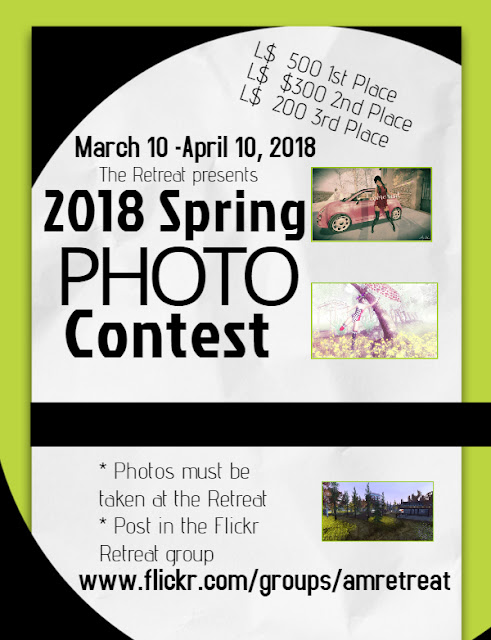 I am happy to announce the Spring 2018 Photo Contest is ready to start.Please stop by the Retreat and take your pictures.Post them in our Flickr group.
The contest runs until April 10, 2018Winners will be announces April 15th, 2018 They will be displayed at the Galicia Art & Cultural Hall.L$ 500 first placeL$ 300 2nd placeL$ 200 3rd placeRules: Pictures must be taken at the RetreatEnter as often as you like!!!Good luck :)
Posted by Anjelikka at 10:30 AM No comments:

"fester" or not to "fester" 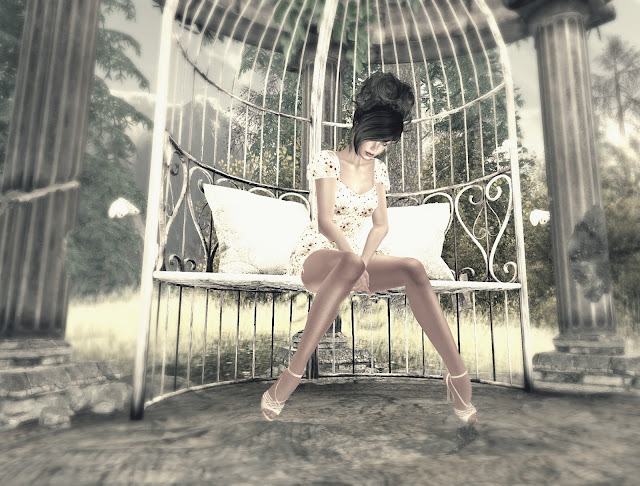 The sudden disappointment of a hope leaves a scar which the ultimate fulfillment of that hope never entirely removes. No matter what the disappointment is one must move on and be stronger than before. 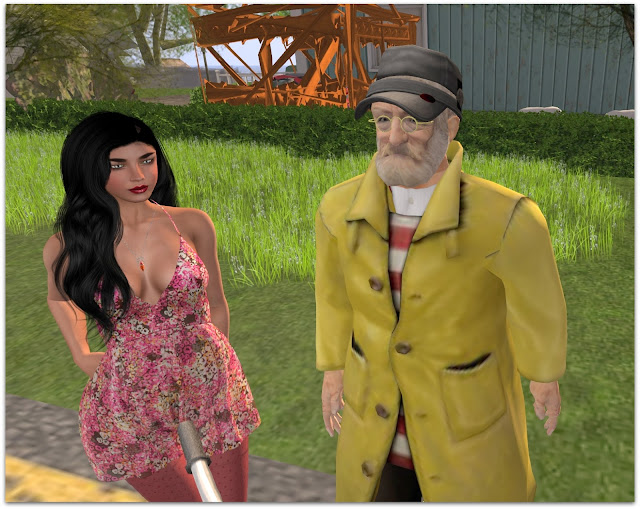 You can ask someone older than you for directions, because the wise have lived through it and may have answers. Never  fester in it too long because that can get toxic. It turns into resentment and even more disappointment. Things that fester have a decaying odor, and bad feelings can have a decaying effect on friendships and the heart. Letting bitter emotions fester often leads to their getting worse.
Posted by Anjelikka at 9:01 AM No comments:

Greg trying to impress me with his balancing skills, ha!
But on the serious note, there is a time when you need to balance your life and get some nice harmony back. My suggestion is to always  disconnect on the weekend. I hear the excuses already, but try it, at least for one day or even a few hours each night. Put the phone down and turn off the computer. Give your work brain a rest.

Set aside quality time with your family and friends. Don’t just sit in front of the television, really connect and pay attention to those you care about. Make a date with your significant other, have coffee with a friend.Really get to know the people around you. 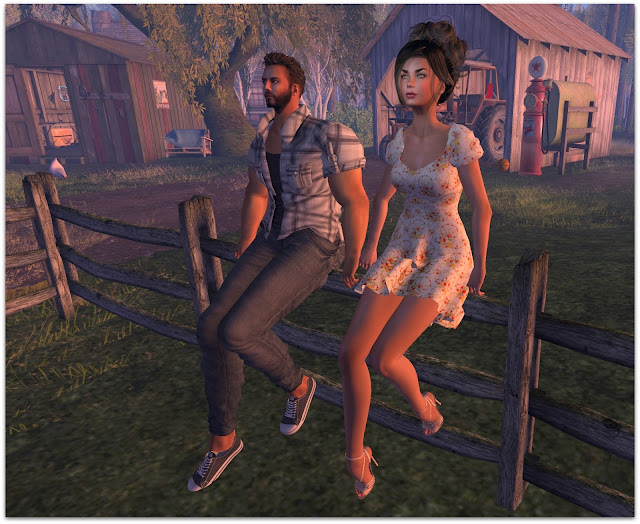 Most important is to laugh, joke, play, find your sense of humor, subscribe to a daily joke or get a tear-off calendar. Nothing makes the feel better as fast as a good old-fashioned belly laugh.
Posted by Anjelikka at 8:43 AM No comments: 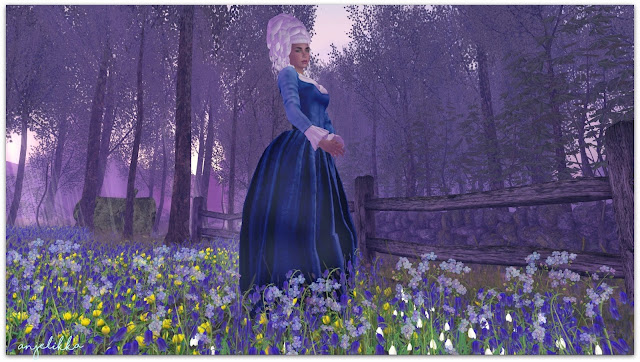 This is Mme. Donna Pericolosa all dressed in blue. I will tell you more about her later, but she is a character in a Role Play in Second Life.

This is actual part of the Virtual Worlds Best Practices in Education Conference 2018. 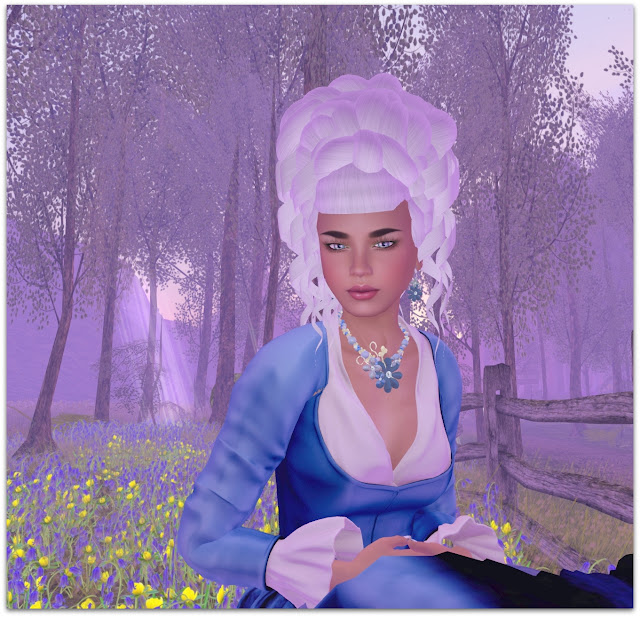 Posted by Anjelikka at 8:26 AM No comments: 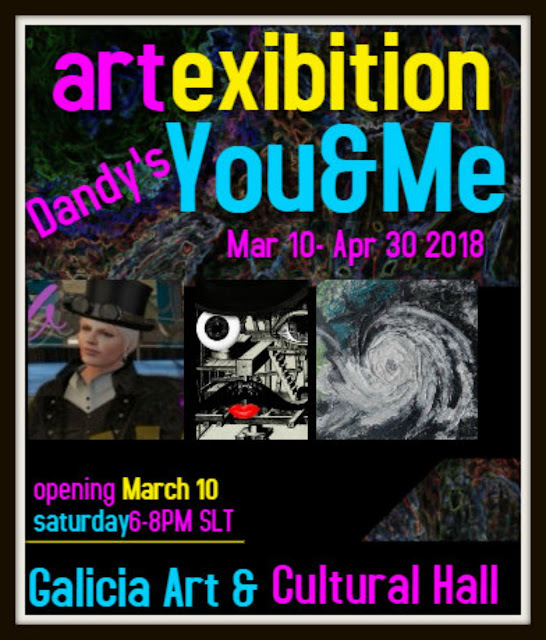 This will be officially open on March 10, 2018, but you can stop by anytime to get a sneak-peek here. Dandy is a DJ in Second Life and he also enjoys art.

The Galicia Art & Cultural Hall has been around for a few years now and hosts artists from all over the sim world. You can display RL art as well as SL art. If you want to have an exhibit here, just contact me and we will set you up for the next available date. 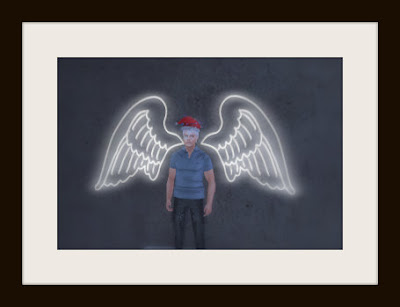 Posted by Anjelikka at 8:32 AM No comments: